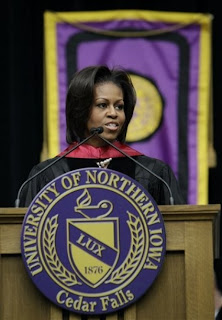 Whatever one's views of the Obama's political objectives, the course of their life is certainly inspirational, especially for anyone who wants to work to serve others. Their overwhelming commitment to the goals of education should be commended, even by those who normally like to focus more on fiscal concerns. An educated populace is the best defense we can have against a failing economy in the future, while a failing educational system will devastate every aspect of our society.
Posted by azjauthor at 6:16 AM No comments: