Day 40: The Finale, or the First Day of the Rest of Our Lives

So today I woke up with a sense of relief that this crazy roller coaster ride which I got us on was finally coming to an end. Don't let this seem as if I'm disappointed in the experiment - far from it, I think this has been one of the best experiences of my life.

Still, the fact is that by setting a goal to give in this way, I turned it into a bit of a chore. From time to time, I'd reach the end of the day, exhausted, realizing that I hadn't really given anything ... and I can honestly say that, at those moments, I wasn't really a cheerful giver. So, while goals are nice, and it's good to set aside a portion of your income, I don't suggest turning it into a chore in any way.
But the project was what it was, and today it ends ... and my work of turning it into a book which people will want to buy begins. I'm actually really looking forward to it, and I have a great deal of confidence that the giving experiences I've had in my life and in this forty days will prove compelling enough to get the attention of a publisher.
So ... on to the day 40 gives:
First, some catch-up. You may recall that we were buying Joy a membership in the Aspire Indiana Farm, to provide her massive family with fresh vegetables over the summer. I went onto their website and signed Joy up, but did so by entering her contact information, including her e-mail. They sent a confirmation e-mail to her, but I need the invoice number from that e-mail in order to actually pay for it. It's been two weeks, and I'm still waiting on that invoice number. So I wrote a check to Aspire Indiana Farm for the amount of the CSA and am sitting it aside to pay for Joy's invoice once I get the number.
Similarly, my sister's birthday present (swim lessons for her 16 month old daughter and herself at the YMCA) continues to go unpaid, because she hasn't gone to the YMCA to find out the cost. So I just wrote a $50 check to the YMCA and am mailing it to her, which should be enough to cover the lessons.
With those expenses caught up, we were able to look at the money left over today and decide what to do. First things first, we stopped by the grocery store on the way to church, which was have a potluck lunch, to pick up our food.
Then, following lunch, we went out to my mother's house and I unloaded things from the back of her pickup truck. She'd moved up from Vincennes to Anderson (a three hour move) last fall, but hadn't been able to bring some of her outdoor supplies, including some spring flowers and bulbs, and so Amber drove down with her yesterday to collect some of those things. The truck, therefore, needed unloading today ... and I did that in relatively short order.
After Mom's truck was unloaded, I then proceeded to my dreaded give of the day ... Locks of Love. Yes, you are correct, I came nowhere close to reaching my $10,000 goal for Heifer International in 40 days, and originally I set this as a condition for me to contribute my hair. The problem is that it just didn't work, so I was left with a decision ... either give up or not.
We decided not. Amber and I remain committed to raising the $10,000, even if we now realize that a 40 day time limit is perhaps a bit limiting (at least in our current situation). And since we will raise the money, I figured I might as well go ahead and donate the hair now and get it over with. So now .... the before photos: 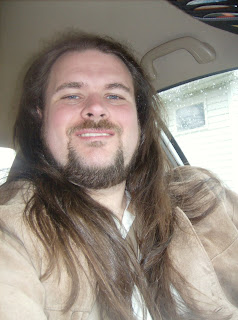 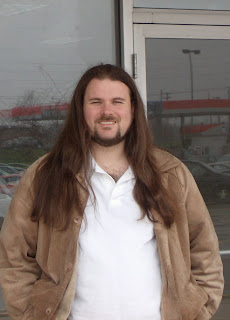 And the "after" photo (more to come): 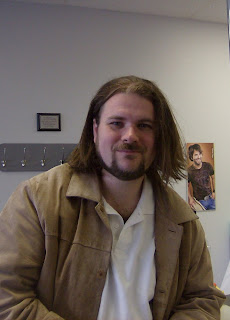 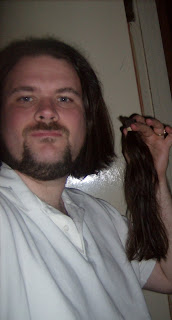 It feels strange to be without the tail, and I'm certainly not too sure how I feel about the new do (although Amber claims she likes it), but ... it was (relatively) painless, and the hair will be used to make a wig for a child with medical hair loss, which is a far better use than being on my sorry old head!

For that matter, my hair will probably be a bit healthier now and this may prevent the slow thinning that I was beginning to notice. So, once again, this act of giving holds within it a reward, which has been a recurring theme throughout this experiment, and is of course the very concept that inspired me to start it in the first place.
And having started it, it's now time to finish it ... which means that the last bit of my income has to go away. We gave a $25 tip to the hairdresser who performed the cut above. (The Great Clips hair salon chain, or at least the one we went to, do not charge for Locks of Love donation cuts, so in order to tip the stylist on the debit card we use for our giving fund we had to buy some hair product. It cost under $10, which is less than the haircut itself would have cost.)
When I got home, I was ready to pay out the last of the money ... and then the phone rang. Our local firemen association was soliciting donations. Yes, they could have some money. (If they'd called 20 minutes later, they'd have been out of luck.)
The final two donations are in honor of my friend Robert J. Sawyer, the science fiction author who wrote the novel FlashForward, which provides the basis of the ABC television series of the same name. (He's known for many other things, but at the moment that's the biggest one.)

Early on, I reached out to a handful of friends and asked for some ideas of charities they like to give to, so that I could profile them. Unfortunately, the 40 days slipped by faster than I really anticipated, and I didn't get to focus quite as much on profiles of individual charities as I would have liked ... but still, these two charities are incredibly worthwhile, so I decided to split the remains of our giving money between them:
Note: Rob is Canadian, so he donates to the Canadian branch of these charities.

I recommend Rob's 1997 novel Frameshift, which features a main character who does, in fact, suffer from Huntington's Disease, a horribly debilitating and ultimately fatal neurological disorder, as a enjoyable way to learn further information about the disease. (And yes, I do realize that's a slightly ironic choice of words.)
To learn more about Diabetes, just follow a modern western diet of fast food and high fructose corn syrup ... you'll get it eventually and learn all about it.
And with those donations ... the 40 Days of Giving project is officially complete, but the giving does, of course, continue. In the coming days, I'll be posting some immediate reflections on the whole experience but one thing is certain - this experiment is just the beginning. Amber and I are continuing to raise money for Heifer International, and other charities, and we're looking for ways that we can get the proceeds of the book (once it's published) to help promote further giving as well.
I think some of the results of this project will absolutely fascinate you. Stay tuned!
Posted by azjauthor at 2:35 PM